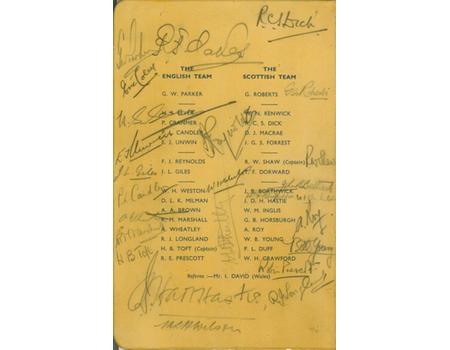 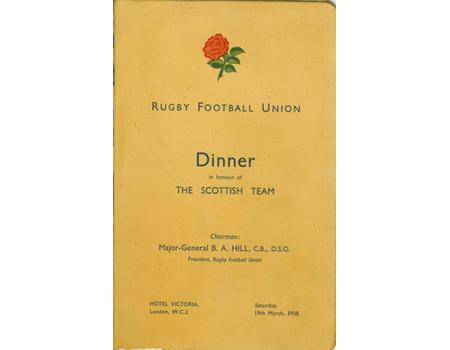 Menu card for a dinner held in honour of the Scottish team after the match with England on March 19th 1938. Scotland won the match and so took the Triple Crown (there was no Grand Slam as France had been suspended at the time).

Single folded card. 18 x 11cm. Slightly rubbed to spine. The surface of the card seems to have been treated with a very thin layer of varnish which has served to protect the pencil autographs very well. Signed to the back cover in pencil by 24 players and staff from both teams - these include Parker, Sever, Unwin, Giles, Candler, A Wheatley, H Wheatley, Marshall, Toft, Longland, Prescott, Reynolds and  Weston (all of England) and Dick, Roberts, Shaw, Borthwick, Blackadder, Roy, Young and Hastie (all Scotland). The 3 other autographs are RF Oakes (President of the Yorkshire RFU), Eric Coley (ex-England) and MLH(?) Wilson. Good/very good condition.