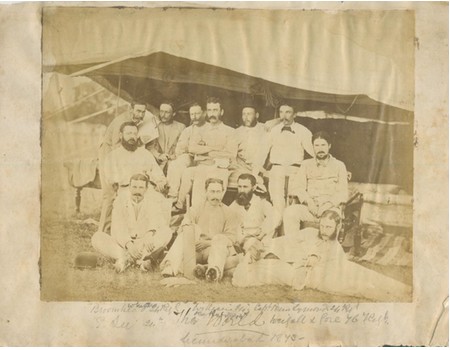 Original sepia photograph of a regimental cricket team taken in Secunderabad and made up from soldiers of the 24th and 76th Regiment of Foot. Players featured include Lieutenant Gonville Bromhead V.C. (famously played by Michael Caine in the film Zulu), Lieutenant William Penn-Symons, Williams, Weigall, Whistler, Gore, Lee and Brett. Bromhead is the central figure in the back row, holding the cricket ball. These players are named to the lower border in pencil and the photograph is dated 1873. However, it is more likely to be from a couple of years earlier than that as the two regiments overlapped in Secunderabad from 1870-72. The previous owner has done some extensive research on this (and the players depicted) and this information will be passed on with the photograph.

21.5 x 28cm overall. The photograph is glued down to the page, on relatively thin paper. A fascinating photograph.