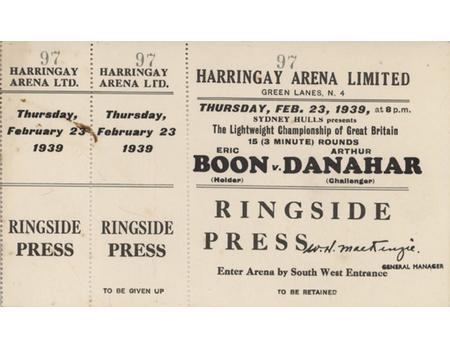 Original ringside Press ticket for the Lightweight Championship of Great Britain fight at Harringay Arena on February 23rd, 1939. This was the first ever live televised boxing match, shown live by the BBC and simultaneously in several cinemas. This preceded the first televised heavyweight match between Baer and Nova, which was held on June 1, 1939. Boon finally won an epic encounter by TKO in round 14.

The ticket still has two stubs attached. Small stain to front. This comes directly from the collection of Sydney Hulls, the well-known boxing journalist, whose father (also called Sydney Hulls) was the promoter for this fight. Very good condition.