Tennis » Tennis Books » Lawn Tennis History » THE GAME OF LAWN-TENNIS, WITH THE LAWS OF THE MARYLEBONE AND ALL ENGLAND CLUBS, BY "CAVENDISH"

THE GAME OF LAWN-TENNIS, WITH THE LAWS OF THE MARYLEBONE AND ALL ENGLAND CLUBS, BY "CAVENDISH" 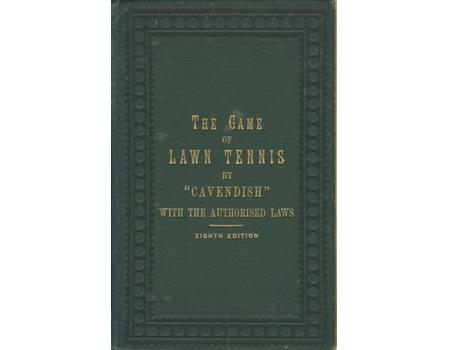 Henry Jones was Honorary Secretary of The All England Croquet Club in 1871 and a member of the committee of The All England Croquet and Lawn Tennis Club in 1877. He was an expert at card games and wrote booklets on the laws of play, so he was just the man to pen the first, universally accepted code of laws for Lawn Tennis. In all, there were nine editions of his "Laws", this being the eighth. The first came out in 1876, the last (ninth) in 1890. The first five editions also carried the laws of Badminton. Later editions contained not only the laws of the game, but also hints on how to play and tactics.