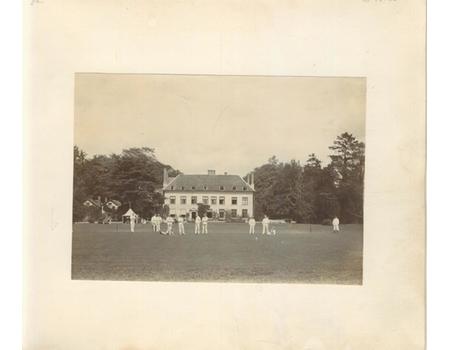 Original photograph of a cricket match being played in front of Heath House, Hopton Heath, Shropshire. The photograph was taken in 1890 - the opposition is not clear but that year the Heath House cricket team played against the MCC, Free Foresters and Ludlow, amongst others. Through the 1890s many well-known cricketers played at the ground, including Pelham Warner, W.E.W. Collins, Rev. G.E. Willes and P.H. Foley. In more recent times the house became famous for the murder of its reclusive owner Simon Dale in 1987. The prime suspect was his estranged wife Baroness Susan de Stempel, but the case remains unsolved.