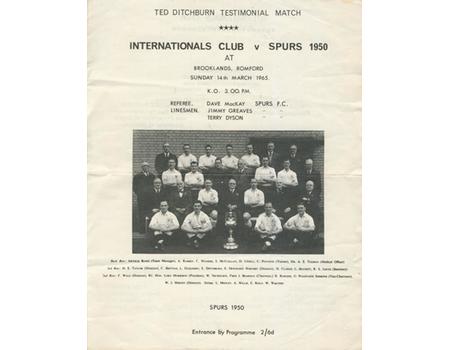 Official programme for the match played at Romford on March 14th 1965. The game was arrannged to raise money for Ditchburn's tesimonial and featured many great names for the early 1950s. The Internationals included Kelsey, Barnes, Franklin, Blanchflower, Lofthouse, Bentley, Hill and Finney and the Spurs 1950 team included Ditchburn, Nicholson, Burgess, Duquemin, Baily and Bennett. Dave Mackay was the referee and Terry Dyson and Jimmy Greaves were the linesmen.