Cricket » Cricket Books » Cricket Tours & Tests » THE IRISH CRICKETERS IN THE UNITED STATES 1879: BY ONE OF THEM

THE IRISH CRICKETERS IN THE UNITED STATES 1879: BY ONE OF THEM 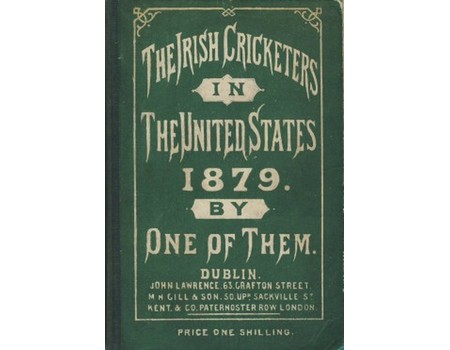 A jolly account of the cricket tour of the Gentlemen of Ireland in the United States during the autumn of 1879. The author, Henry Brougham, was "one of them". Also among their number was the captain, Nathaniel Hone, Charles Barrington, brother of the Lord Mayor of Dublin, Sir George Colthurst, Hugh Gore, and Dr Arthur R.F. Exham. The bulk of the side was drawn from members of the famous Phoenix Club in Dublin. As an appendix, there are two colourful contemporary reports of the players and their deeds, one from the the New York Herald of September 12th, 1879, the other from the New York Daily Courier, September 18th, 1879.

First Edition. 8vo. [iv] + 103pp. Original cloth-backed printed boards, sl rubbed. Foxing to the first dozen or so pages, also last few and page edges. Slight rubbing to the top edge and corners of the boards where the green paper covering has been removed in very small patches (at most 3-1mm) and a previous owner has made an attempt to cover the loss in a complimentary ink, only noticeable on very close inspection. Also small apparent crease mark to the lower left hand corner of lower boards. Otherwise a very good copy. Inscribed "with the Author's Compliments" to the fly-leaf. Ex-libris Robert Stratten Holmes, with his signature on the half-title page.  [Padwick, 5772]