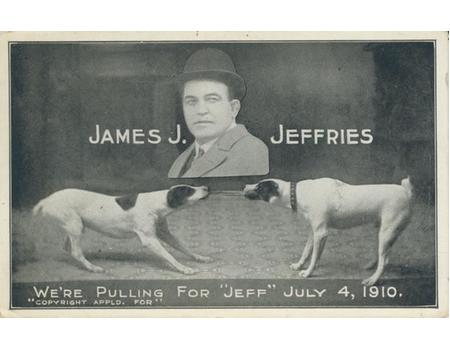 Original boxing postcard stating that "We're Pulling For Jeff, July 4, 1910". This was published in the lead up to what became dubbed "The Fight of the Century" as Jim Jeffries, the great white hope, came out of retirement to challenge the champion Jack Johnson for the World Heavyweight Crown in Reno, Nevada. Despite great optimism from "white" Americans Johnson won the fight convincingly. The postcard has been postally used (sent from Los Angeles on June 19th 1910), the sender asking "How are you betting? - it is all Jeff here".