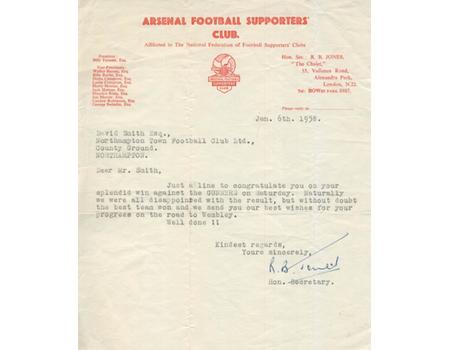 Original typed letter from R.B. Jones, the Hon. Sec. of Arsenal Football Supporters' Club, to Dave Smith, the manager of Northampton Town Football Club, dated January 6th 1958. Two days earlier the Cobblers (Third Division South) defeated Arsenal 3-1 in the third round of the FA Cup. Jones states that "without doubt the best team won and we send you our best wishes ...". Signed by Jones in ink to bottom. Northampton lost to Liverpool in the next round but this was still a high-point in Smith's managerial career.