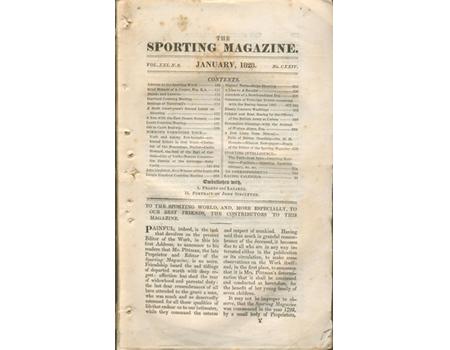 Volume of The Sporting Magazine for January 1828. The magazine largely covers country sports but in this issue a reader has sent in details of two cricket matches between the officers of the Brigade of Guards and both the officers of the Second Brigade and the The Army. The matches were played at Campo Picaue, near Lisbon, during the summer of 1827 and full scorecards are printed. A number of eminent soldiers were playing but the most significant was Sir Frederick Hervey-Bathurst of Clarendon Park, who went on to play cricket for the MCC and Hampshire. Both his sons also played for the county.

8vo. The volume has been disbound with holes to the left-hand margins, not affecting text. Complete without wrappers and ideal for rebinding. Some light foxing but generally very good.