A letter written by David Sheppard, Sussex & England cricketer & Bishop of Woolwich and Liverpool, takes us back to the bleak days of cricket in Apartheid South Africa.

David Sheppard is the only ordained minister to have played Test cricket. He was both a religious leader and a cricketer at the highest levels. Captain in turn of Cambridge and Sussex, Sheppard was an opening batsman. He scored more than 2,000 runs in each of the three seasons from 1951 to 1953, including 24 centuries in the process. Sheppard was one of Wisden’s Cricketers of the Year in 1953. He managed, too, to be an integral member of the England cricket team from 1954 to 1963 while pursuing a clerical career, which culminated in his hugely significant and influential role as Bishop of Liverpool in the 1980s.

Throughout Sheppard’s clerical career  he was an outspoken supporter of the poor.  He was also a strong opponent of South Africa’s then political system of Apartheid. David Sheppard refused to play cricket against the touring South Africans in 1960. He also oppposed the proposed MCC tour to South Africa in 1968-69 in which South Africa would not allow Basil D’Oliveira to play.

As the Bishop of Woolwich, David Sheppard wrote this letter in 1970. Here he sets out clearly his views about England cricket’s relationship with South Africa at the time. 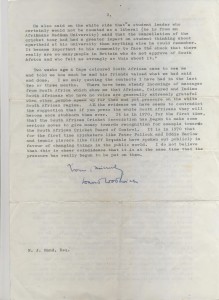 David Sheppard’s letter gives us a fascinating insight into the background, experiences and discussions circling England cricket’s relationship with South Africa at the time. With the benefit of hindsight, we can see how wise Sheppard was in his views. The letter is an important reminder of  a great England cricketer and South African’s cricketing history. David Sheppard’s letter should be a reason for celebration. It may have a way to go, but South African cricket has come a long way too.