Wisden Cricketers' Almanack is the longest-running, continuously published sporting handbook in the world and a full set is the Holy Grail for cricket collectors.

A new edition of Wisden has been published every year since 1864. The first edition was priced at one shilling. It ran to only 112 pages and was padded out with several items completely unrelated to cricket, including dates of battles in the English Civil War, the winners of The Oaks, and the rules of quoiting! The instantly recognisable woodcut image on the front of many a Wisden Cricketer's Almanack of two Victorian gentlemen playing cricket in top hats was introduced on the front of Wisdens in 1938. The woodcut was made by Eric Ravilious, a well-known artist of the time, who was killed in World War II four years later. The iconic yellow cover was first introduced in the same year, 1938 on the 75th edition.

There are many stand-out editions of Wisden Cricketers' Almanack, including 1916 and its obituaries of WG Grace and Trumper; 1949, detailing the Australian 'Invincibles' tour under Don Bradman and the 1963 Centenary Edition, which tells the story of how John Wisden started his Almanack. Other notable editions, include the 1875 Wisden Cricketers' Almanack, which is extremely rare and so similarly sought after; and 1896, the year of the first hardback Wisden Cricketers' Almanack. Our range of Wisdens span the rarest Wisden to the most recent paperback edition. If you can't find a specific Wisden, do contact us. We may not have all our Wisdens on the web and we are constantly sourcing more too. 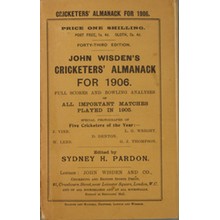