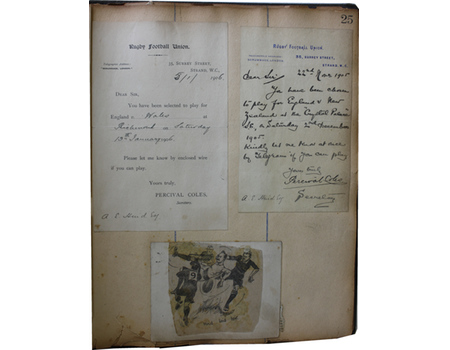 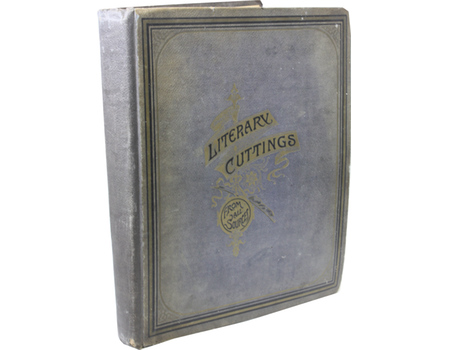 A family scrapbook with items of most interest relating to AE Hind, Cantab triple blue (Track, Cricket and Rugby) who played some cricket for Nottingham and Rugby for that city and primarily Leicester Tigers, where his raw running talent was honed by A.O. Jones. Capped twice for England for matches against New Zealand and Wales, he also toured South Africa with the Lions in 1903 but was injured early on. Mostly newspaper clippings but also handwritten and typed letters from the RFU with his invitations to play for England in 1905 and 1906. Also a series of invitations to 'At Homes' and Dancing at the residence of the Governor of Western Australia - Hind and his wife moved to Perth in 1911 to farm, returning to the UK in 1920 where he continued to play Rugby and latterly golf. Concludes with memorial leaflet from Hind's funeral service March 25th, 1947.

Folio, scrap book. 100 pages. Tipped in and laid in newspaper cuttings, letters, telegrams, invitations photos. Some items have been annotated in pencil and ink. Vast majority of items in good to very good condition, some browning excepted. Material related to varsity games, football, rugby, athletics, golf, touring etc. Pages a touch browned and brittle in places but for the most part very good. In the original gilt embossed decorative cloth with generic title. Rebacked, covers a little tanned, bumped and rubbed but good.