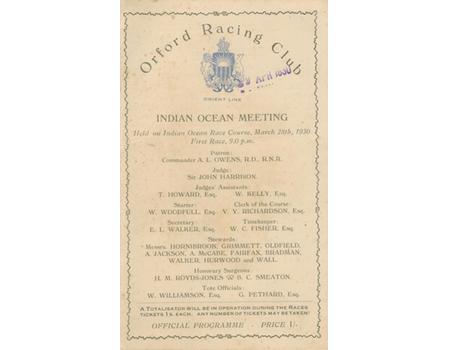 Programme for the Orford Racing Club's Indian Ocean Meeting held on board the Orient Line's SS "Orford" on March 28 1930 and attended by the Australian cricketers who were travelling to England. Ten players are listed as race stewards on the front cover, including Bradman, while Vic Richardson and Ted a'Beckett are down as owner's of horses running in the fifth race. A most unusual and charming item from the Australian tour of UK in 1930.

16.5 x 10cm. Single folding card. The race winners have been written in in pencil on the back of the card. Very good.