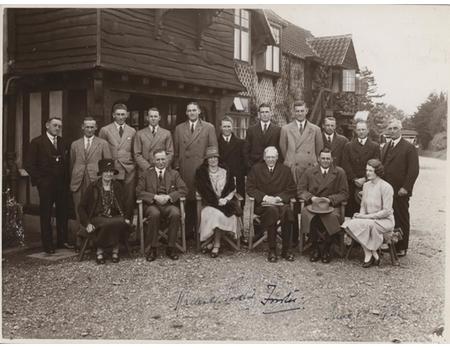 Original photograph of the 1930 Australian cricket team, taken at Lord Forster's house on Sunday June 1st 1930. Lord Forster played for Hampshire in the 1880s and 1890s, later becoming President of the MCC and Governor-General of Australia from 1920-25. This photograph was taken when the Australian team, who were playing Hampshire at Southampton, visited Lord Forster on the Sunday. The previous evening Bradman had needed 46 runs to become the first Australian to score 1000 runs by the end of May - he finished the day on 47* and went on to score 191 on the Monday. Signed to the front very nicely by Lord Forster and his wife Rachel.