THE BOOK OF GOLF AND GOLFERS 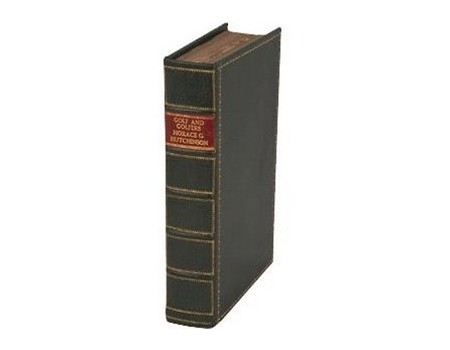 With contributions by Amy Pascoe, H.H. Hilton, J.H. Taylor, H.J. Whigham and Messrs. Sutton & Sons. Horace Gordon Hutchinson (1859-1932) was brought up in North Devon hard by the links at the Royal North Devon. He started writing as early as 1886, his first work being Hints on Golf - the game’s first instructional. As author of over 50 books, his range of subject matter was wide, taking in not only golf, but cricket, fishing, tennis, natural history, even mysticism. Unlike his protégé Bernard Darwin, his writing style was trammelled and concise, more from the school of journalism that literary critique. Perhaps his finest literary achievement was Golf, a volume in the famous Badminton series, published 1890. This key work played a significant part in the golf boom which hit Britain at the end of the 19th century. In 1897 he joined Country Life as a roving sports reporter, penning a weekly column for what was at the time was considered the lifestyle magazine of Britain. As a player he won the British Amateur Championship in 1886 and 1887.