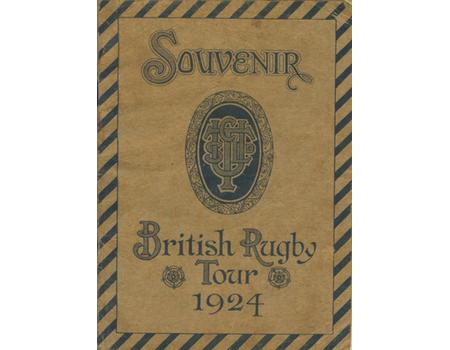 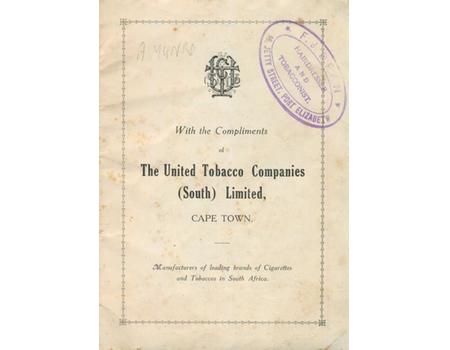 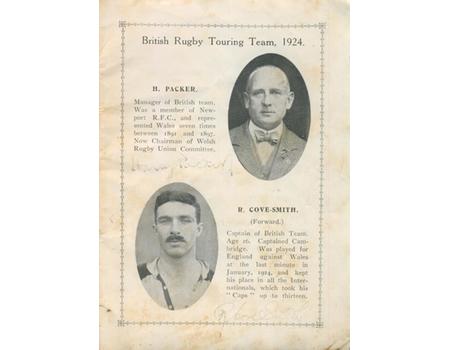 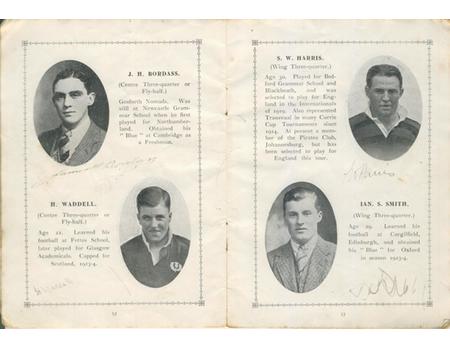 Rugby tour brochure published by the United Tobacco Companies Ltd., Cape Town, to accompany the 1924 British Lions tour to South Africa. Contains photographic and pen portraits of all the tourists and many prominent South African players. Also contains details of previous Lions and Springbok tours, back to 1891. Fixtures list to last page, completed neatly in ink - the tourists won 9 matches but lost three Tests and drew one. Signed to their portraits, and occasionally elsewhere, by 30 British Lions players and staff - Packer, Cove-Smith, Cunningham, Marsden Jones, Voyce, D.S. Davies, Blakiston, MacPherson, Roche, Clinch, Hendrie, Ross, Harold Davies, Howie, McVicker, Henderson, Whitley, Young, Griffiths, Bordass, Waddell, S.W. Harris, Smith, Kinnear, Gaisford, Drysdale, Bradley, Brand, Wallace and one other (unidentified). Also signed by a  number of the South Africans - F.W. Mellish, T.L. Kruger, B. Osler, K. Starke and one other (also unidentified). PLEASE NOTE: the centre four-page spread (pages 19-22), which would presumably have had more pen and photographic images of South African players, are missing. One other copy of this brochure (unsigned) has been seen and the same pages were missing from that too.

14 x 10.5cm. Paperback. 40pp. A few neat pencil notes inside. Many pages are dog-eared and there a few light creases throughout. The centre four pages are loose from staples. All the autographs are legible but are relatively faded. Despite the missing pages this is still a remarkable piece of British Lions memorabilia which had been, until very recently, in private hands in South Africa.