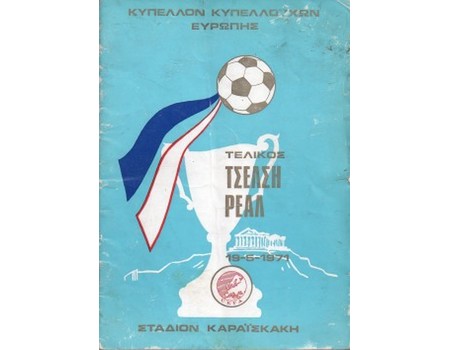 Official football match programme (issued by UEFA, in Greek, Spanish and English) for the 1971 European Cup Winner's Cup Final between Chelsea and Real Madrid in the Karaiskakis Stadium, Athens, Greece on the 19th of May 1971. It ended 1-1, with Ignacio Zoco scoring a late equaliser after Peter Osgood had put Chelsea ahead. The replay was staged at the same venue two days later. Chelsea won 2-1 thanks to goals from Peter Osgood and John Dempsey.