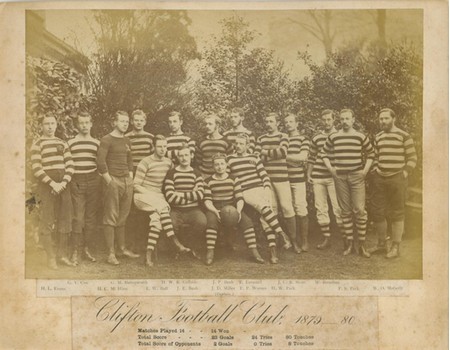 Original sepia photograph of the Clifton RFC team of 1879-80, a season in which they won all 14 fixtures, conceding no tries throughout the campaign. The team included William Moberly, who played rugby for England and cricket for Gloucestershire; HWR Gribble (Gloucs. cricket 1878-82); George Butterworth (Wimbledon semi-finalist in 1880); J.D. Miller, who helped form the Gloucestershire RFU; H.L. Evans, who played rugby for Scotland; G.V. Cox, the cousin of Harry Vassall; and J.P. Bush and J.E. Bush, two brothers of J.A. Bush.

21.5 x 28cm overall. Laid down to card with full printed team legend and season's results beneath. Presumably this was originally a leaf from a photograph album, with a large group photograph to reverse. Some light foxing, and crease to one corner - but generally in very good condition.