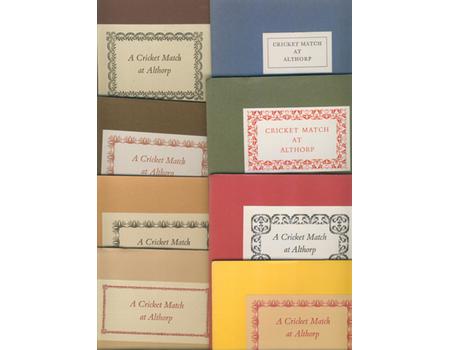 Eight small volumes, being the records of matches played at Althorp between 1980 and 1990. All eight involve Earl Spencer's team, with the opposition for 1980 and 1982 being The Master of Christ's XI and for the other matches (1983, 84, 85, 86, 87 and 1990) being Sir John Plumb's XI. Each contains a full scorecard and some brief further details. The 1981 match was abandoned after poor weather. Sir Robert Fellowes captained Earl Spencer's team each time, with other players including Viscount Althorp, Neil McCorquodale and various members of the Buller family.

Each paperback. 8vo. Printed on quality paper with different coloured wrappers and printed labels to front. All limited editions - 1980 being in an edition of 70 and the rest of just 50. All in excellent condition. There are many photographs of Princess Diana attending cricket matches at Althorp during the early 1980s.