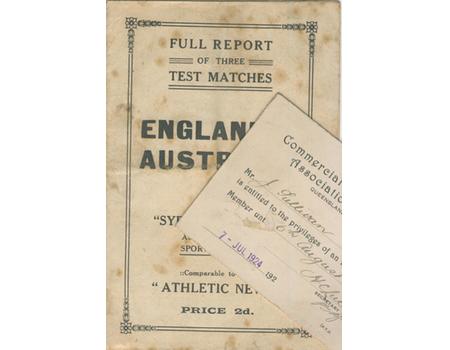 A small stapled pamphlet giving full reports of the three Test matches between Great Britain (called England here) and Australia on the rugby league tour to Australasia in 1924. The tourists won the series 2-1 with Wigan's Jim Sullivan top scoring on the tour. Contains lengthy reports of each match which have been reprinted from the Sydney Referee sporting paper. It seems that this booklet may have been published on the team's return to the UK. From the personal collection of Jim Sullivan and comes with a visitor's pass, in his name, to the Commercial Traveller's Association Club in Queensland, dated July 7th 1924 and valid for one month.

Sullivan was one of the greats of pre-war rugby league, breaking many records during his long period with Wigan. He also coached them either side of the war.