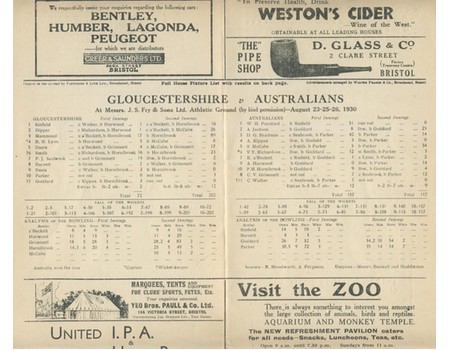 The day after Australia had famously won the Ashes at the Oval in the final Test match of the summer they travelled down to Bristol to play Gloucestershire. The rest is the stuff of folk-lore as the two sides played out a remarkable tied match. Official fully completed printed scorecard for the tour match played at Fry’s Ground, Bristol on the 23rd-26th August 1930. Gloucestershire batted first and made 72 with Hornibrook taking four wickets. In reply Australia totalled 157 with Ponsford making 51 and Bradman a dogged 42, Goddard taking 5-52 from 26 overs. In their second innings, Gloucestershire made 202, Hammond playing a masterful innings of 89, Hornibrook taking a further five wickets. This set Australia 118 to win and at 77-1 all seemed comfortable. However, on a drying pitch the spinners Goddard and Parker became almost unplayable and they were bowled out for 117 after an agonising few overs with the scores level. Parker took 7-54 from 35 overs.