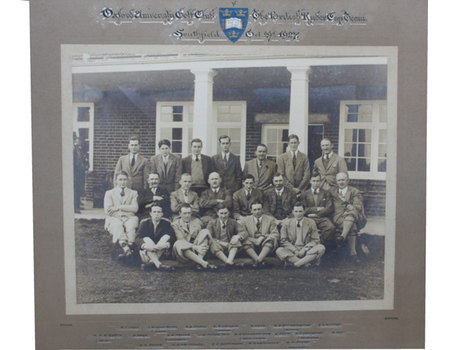 Original sepia tinted golf photograph of the first (1927) Great Britain & Ireland Ryder Cup team and the Oxford University Golf Club taken at Southfield on the 29th of October 1927. The Oxford side includes Raymond Oppenheimer, captain of the British Walker Cup team in 1951 and later Chairman of the Walker Cup Selection Committee. Pictured in (addition to the Oxford golfers) are Jolly, Cotton, Gadd, Havers, Herd, Taylor, Braid, Ray, and brothers Charles and Ernest Whitcombe. JH Taylor's son, Jack, was a member of the Oxford team and is pictured next to his father.

Overall 47 x 35.8cm. Original photograph laid down to photographer's mount (Soame of Oxford) with title above and full legend below photograph. Lightly soiled with a liquid stain to lower left of mount. Photograph a little sunned but otherwise very good.