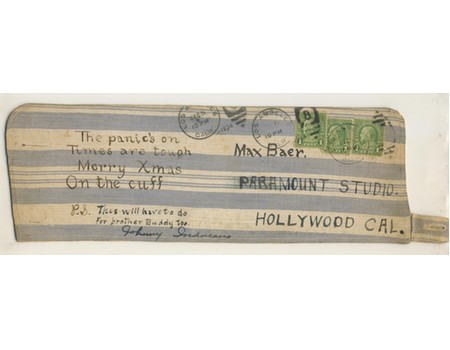 Christmas card in the form of a starched and ironed shirt cuff, sent by the American welterweight boxer Johnny Idrisano to Max Baer, December 1934. At the time Idrisano had just retired and Baer was World Heavyweight Champion. The card was sent to Baer at Paramount Studios, Hollywood, where he was filming "Kids on the Cuff" - hence the unusual card and the message - "The panic's on, Times are tough, Merry Xmas, On the cuff - p.s. This will have to do for brother Buddy too". Nicely signed by Idrisano. Idrisano also had a minor acting career after boxing, and sadly committed suicide in 1968.