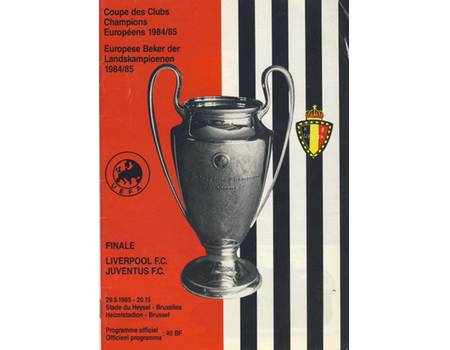 Official match programme in 4 languages for the 1985 European Cup Final between Liverpool and Juventus at the Heysel Stadium in Brussels, Belgium on 29 May 1985.

The match was overshadowed by the disaster which took place about an hour before kick off, when Liverpool supporters charged at Juventus supporters, causing a huge crush of people against a stadium wall which subsequently collapsed. 39 people were killed and hundreds injured.

It was decided that the match should be played, as it was felt that abandoning it could cause further trouble. Juventus eventually won 1-0.