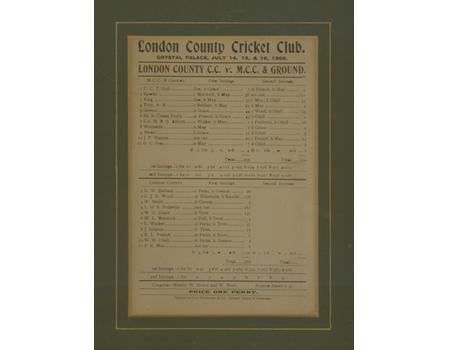 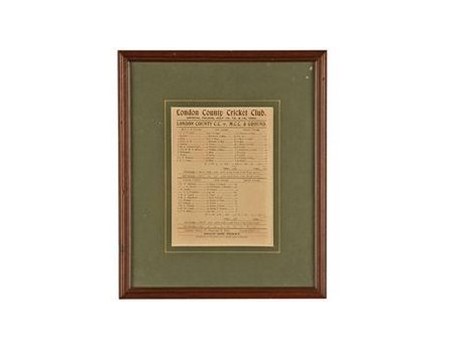 Fully printed cricket scorecard for the game played at Crystal Palace on 14,15 &16 July 1902. London County won by an innings and 43 runs despite Rawlin (122*) carrrying his bat in the second innings. Wood, Poidevin and WG Grace scored centuries for County. But the real interest is the appearance of one Sir A. Conan Doyle in the MCC team. He made 43 & 0 and bowled 12-0-46-0. 43 was his highest first-class score.

Sir Arthur Conan Doyle (1859-1930) was a hard hitting, though not especially skilled, batsman and a bowler of slow, loopy lobs which often took a puzzling flight. Indeed he once quipped that so slow was his bowling that if he ever delivered one he didn't fancy could run down the wicket, intercept it, and come back for another go!  In 1899, for MCC, he took seven for 61 against Cambridgeshire at Lord's and on the same ground two years later carried out his bat for 32 against Leicestershire. It is said that Shacklock, the Nottinghamshire player, inspired him with the Christian name of his famous character, Sherlock Holmes, and that of the latter's brother Mycroft was suggested by the Derbyshire cricketer of that name.