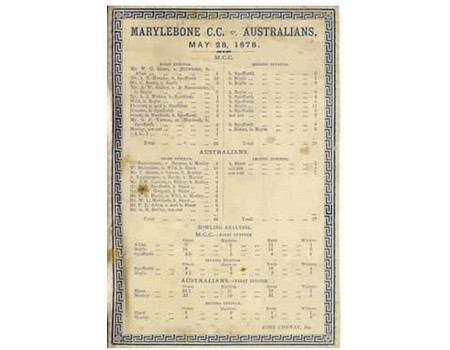 Lord's, May 28, 1878. In one of the most remarkable matches ever played the Australians scored only 41 yet won the match by 9 wickets. England, led by WG Grace, were bowled out twice in an afternoon, scoring just 33 and 19. Spofforth, their champion bowler, returned match figures of 11 for 20 and Boyle 8 for 17. This was the second game on the first ever Australian tour of England, and helped establish their formidable reputation. As a result, the tour was both a financial and sporting success, ensuring that many more tours would follow. This was the property of Alick Bannerman, the famous "stone-waller", and has his name printed to the reverse.

19 x 13cm. Post-match commemorative card, printed in blue lettering on silk, sl. foxing and very sl. fraying to edges. Interestingly, the bowling analyses for the second innings have been incorrectly recorded, with one of Spofforth's wickets being credited to Boyle. Very good. Extremely rare.