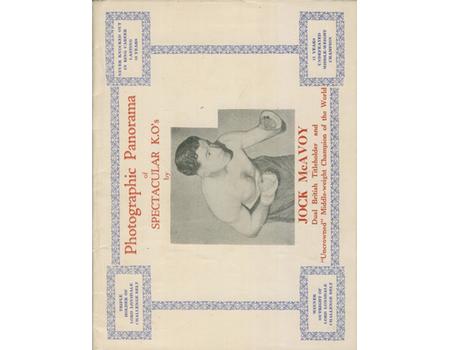 Souvenir brochure celebrating McAvoy's knock-downs, of which there were many. Jock McAvoy (1908-71) was known as the "Rochdale Thunderbolt" having hailed from the Lancashire town and Joseph Tolley's famous boxing stable. In the 1930s he held the British and Commonwealth middleweight titles. Later in his career, he fought and lost several heavyweight bouts against such notables as Freddie Mills and Jack Petersen. From 132 wins, he scored 82 knockouts. He lost 14 times with one draw and was never knocked out in a ring career lasting 18 years. Ring Magazine rated him one of their 100 great punchers of all time.