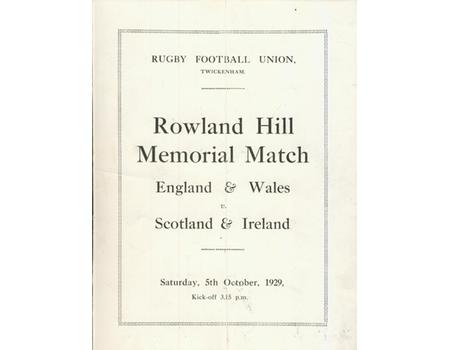 Official souvenir programme issued by the Rugby Football Union for the tribute match to Rowland Hill between the combined XVs of England & Wales against the same of Scotland & Ireland. Rowland Hill (1855-1928) was President of the RFU between 1904 and 1907 and the main force behind the decision to split Rugby Football into two codes, Union and League. In 1926 he became the first man to be knighted for services to the game. The main gate at the RFU headquarters at Twickenham is named after him.

Vertical crease down the middle, o/w clean and free of markings.