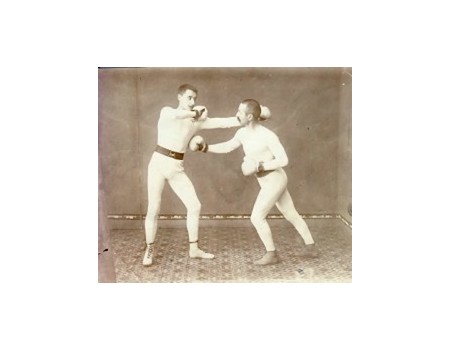 Original black and white photograph of two boxers from the Salle Julien Leclerc. In 1884 Leclerc replaced Charles Lecour as the Principle Professor of the School of French Fencing and later established his own "Salle de Boxe" at 15 Rue de Richelieu, Paris. He was eventually succeeded by his son, Georges. One of the boxers in the photograph is probably Julien's brother, Edouard.

12 x 14cm. Some areas of glue and paper transference to reverse, not affecting the front. Some light creasing, but otherwise in very good condition.