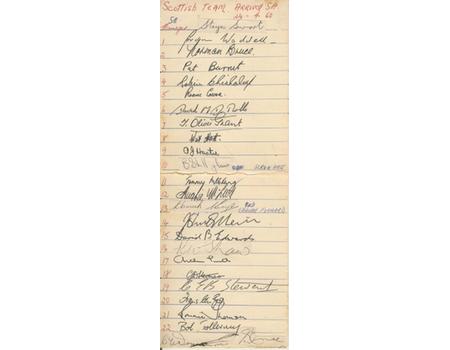 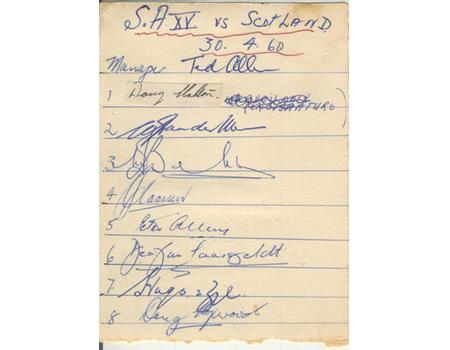 Two autograph album pages, signed by 19 members of the Scotland rugby team that toured South Africa in April 1960. This was the first ever "short" tour, lasting just 3 matches, including the first ever Test match at Boet Erasmus Stadium, Port Elizabeth. The South Africans won 18-10. Signed by Waddell, Bruce, Burnet, Chisholm, Cowan, Rollo, Grant, Hart, MacLeod, Edwards, Smith, Stevenson, Bos, Thomson, Hastie, Stewart and 3 others. The signatures of Shillinglaw, Kemp and Shaw are facsimile and stuck down to the sheet. Signed on the back of one sheet by 7 members of the South African team that played in the Test match, including van der Merwe, Claassen, Allen, van Jaarsveldt, van Zyl, Hopwood and one other. Also signed by Ted Allen, the manager.