THE CRUISE OF THE BRANWEN: BEING A SHORT HISTORY OF THE MODERN REVIVAL OF THE OLYMPIC GAMES, TOGETHER WITH AN ACCOUNT OF THE ADVENTURES OF THE ENGLISH FENCING TEAM IN ATHENS IN MCMVI 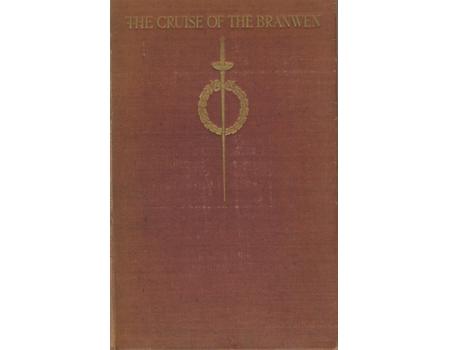 Cook captained the English fencing team in Paris in 1903 and Athens in 1906, and was subsequently involved in the organisation of the Olympic Games in London in 1908. The Branwen was the name of the boat in which the author sailed from Naples to Athens, and back again, to take part in the Games.

Privately printed. 8vo. xviii, 166pp. 32 photographs laid down onto dark olive green paper, with titled tissue-guards facing, with further illustrations in the text. ONE PHOTOGRAPH IS MISSING. Original cloth boards with gilt titles, lightly rubbed. Loosely inserted is a blue printed sheet requesting readers to forward "any corrections or additions they may think advisable" prior to the publication "in the ordinary way" of his subsequent book "The Olympic Games". A good copy. VERY RARE.