Arnold Palmer: a tribute to the ‘King’ of Golf

Arnold Palmer was rightfully crowned the ‘King’ of golf for his huge contribution to glamourising and popularising the sport throughout his career. He won 7 Major titles and had 62 PGA Tour wins and he was the first golf player to make $1 million dollars from the sport. He was a true champion and showman: a perfect combination to please the crowds.

We’ve been browsing through one of his books: ‘Go for Broke’, a memoir of his playing days, packed with bits of Arnold Palmer’s philosophy on golf and entertaining insights into his personal and professional life. He details his childhood. His father was groundskeeper and finally golf pro to the Latrobe golf club in Pennsylvania. It sounds like a perfect training ground for the infant golfer. Deacon, Arnold Palmer’s father, was a stickler for the rules, however. So young Arnold was only very rarely allowed on the Green. He had to make do with practicing in the scrubby woodland, abutting the Green. He would practice for hours, hitting pine cones against trees; aiming the ball for a particular bush. He is sure that gave him his confidence to play in the rough but conversely meant that he felt that putting was his weakest part of his game for many years.

As we all know, Arnold Palmer was the first golf player to capitalise on the tangential business of endorsements in sport. ‘Go for Broke’ gives a great window on how his great friend, Mark McCormack – then a young lawyer, who became a super-agent – built him up and brokered deals. In those 1950s and 1960s days of smoking innocence, Palmer was endorsed by several tobacco companies over the years. By 1964, however, Arnold Palmer had realised he didn’t actually like the taste of the cigarettes he smoked. A doctor advised him to give up smoking after a bout of bad sinusitis. Palmer decided to apply his full self control to the task and completely stopped smoking.

Presumably McCormack was concerned that Arnold was missing a trick. The two found themselves at dinner with the director of advertising for the cigarette company, sponsoring the Bing Crosby tournament that year. McCormack had never smoked, but when Palmer continually refused to pick up a cigarette, McCormack did instead, saying ‘Everybody else in the world is stopping, so I think I’ll start smoking’. As Arnold tried to hold strong, someone said of the brand, ‘Arnold would never have quit smoking in the first place if he’d ever had a good cigarette to smoke…’ Palmer’s attempt to hold his resolve was futile. McCormack was clearly a business force of nature and Palmer soon found himself saying, ‘Well maybe just one cigarette wouldn’t hurt, seeing as how this is a special occasion and all.’  before returning to smoking for several years to come! Luckily continuing to smoke did not hinder the ‘King’ in any way and probably helped his earnings considerably. In the meantime he continued to entertain and captivate millions with his great presence, swashbuckling skill, achievements and style. Today’s top golfers will certainly be playing in his name and memory this weekend at the 41st Ryder Cup. 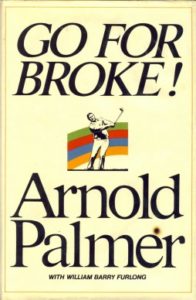