We have been contemplating the huge job in front of King Charles III. We reminded ourselves what an able man he has shown himself to be over the years. Us being us, we looked to sport for the clues. We all know what a great polo player and general equestrian he was. We’ve seen him skiing, sailing, windsurfing and fishing. Less well known was his success on the cricket field.

Following in his father, the Duke of Edinburgh’s footsteps, Charles was an enthusiastic and able cricketer. In 1971 he arrived on horseback, all padded up for a cricket match at Cranwell in Lincolnshire.  Prince Charles was in an RAF team against the Lord’s Taverners.  He batted gamely and scored 17 runs but was bowled by the recently retired Surrey and England cricketing legend, Ken Barrington. Undeterred Prince Charles returned to the crease to bowl 7 overs and wreaked revenge on Ken Barrington by bowling him out.

We wish the new King continued success, going forward. Is it a sign of the power he might have that England won a Test series against South Africa two days into the start of his new reign?! 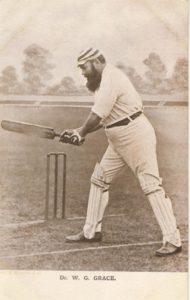 What cricket score can be equalled but never beaten?

What cricket score can be equalled but never beaten? 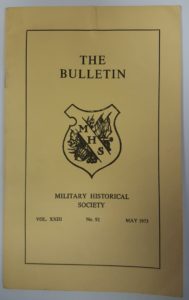 An edition of the Bulletin of the Military Historical Society for May 1973 (SKU 63262)  explains all. On page 119 is an account of an extraordinary cricket match that took place in Shillinglee, Sussex, in 1855. The 2nd Royal Surrey Militia team were dismissed for 0, a record that has been equalled but can never be beaten. 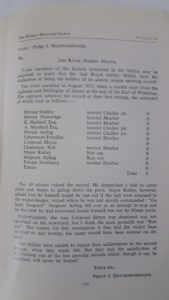 achieved. Since then, teams have tried hard to achieve the same kind of record. It was left to a Kent team in 2016 to get closest in an indoor county chanpionship match. Bapchild Cricket Club were bowled out for 0 in just 20 balls by Christ Church University in Canterbury – a fairly unenviable achievement by Bapchild CC!

Is politics a logical next step after a successful career in sports?  Former athletes, Lord Coe, Sir Menzies Campbell, Sir Chris Chataway and Kate Hoey have certainly all achieved.  We looked at the careers of three exceptional, past  cricketers too to gauge potential success. Results were mixed!

It’s almost an insult to classify CB Fry as ‘just’ a cricketer. He was one of the most consummate all-round sportsmen Britain has ever produced. A brilliant scholar too, he won 12 blues in different sports at Oxford and earned the nicknames, ‘Almighty’ and ‘Lord Oxford’. He was a talented golfer, rugby player, swimmer, tennis player, javelin thrower, sculler and boxer. He played football for Southampton too.

England cricket can be grateful that Fry decided to focus his sports career on cricket. Captain of Sussex and England, England never lost a Test match when CB was at the helm. CB Fry was at his peak in 1901 when he totalled 3,147 runs, an average of over 78 runs per innings. He scored 13 100s and created a record of 6 centuries in 6 consecutive innings in little more than 14 days. England were still looking for him to captain their side when he decided to retire at 49 in 1921.

Fry’s foray into politics was not quite so successful. He failed 3 times to become a Liberal MP. In 1934 he was charmed by Hitler in a meeting with him and Ribbentrop. Reportedly Fry tried to persuade Hitler and Ribbentrop that the Nazis should take up Test cricket. Possibly Fry’s greatest political hope was the offer of the vacant throne of Albania in 1920s. He was offered it while at the League of Nations as secretary to India’s then delegate, one RS Ranjitsinhji. Unfortunately in order to accept, he needed to have an income of £10,000 p.a. and Fry was notoriously short of money throughout his life. Hence no Charles III of Albania in the history books!

Another captain of Sussex and England dipped his toe into politics too, one Ted Dexter. An aggressive, swashbuckling cricketer – again, among many other accomplishments – Dexter decided to enter politics in 1964. England captain at the time, Dexter declared himself unavailable for the 1964-65 South Africa tour because he expected to become an MP in the 1964 election.

He became the Conservative candidate for Cardiff South East, pitting himself against the then Shadow chancellor, one James Callaghan. Callaghan had been the sitting candidate since the constituency was created in 1950. Cardiff South East was then a community of principally dockers and factory workers. Dexter, or Lord Ted as he was nicknamed early on for his aloof self-confidence, did not appeal massively to his potential consituents. His comment that Labour-voting households “could be identified by their grubby lace curtains and unwashed milk bottles on the doorstep” was not a vote winner either.

At the election, Callaghan increased his majority from 868 to just under 8,000. Luckily Dexter was able to return to his day job and joined the South Africa tour as vice captain after all. He made 344 runs in 7 Test innings, an average of 57.

We have to turn to the great Pakistani cricketer, Imran Khan for a more established political foothold. Khan made his debut for Pakistan when he was 18 in 1971 at Birmingham during their England tour. He then played for them from 1976 – 1992, captaining the side during that period too. As captain, he led Pakistan to victory at the 1992 Cricket World Cup, Pakistan’s first and only victory in that competition. Imran Khan retired in 1992 as one of Pakistan’s most successful players. He scored 3,807 runs and took 362 wickets in Test cricket.

In 1996 Imran Khan founded the Pakistan Movement of Justice Party, the PTI and became the party’s leader. Over the last twenty years he has ridden the turbulent waves of Pakistan politics to  take his party to become the 2nd largest party in the National Assembly in 2013.  Since then his political influence has continued to ebb and flow with the twists and turns of his country’s politics. He has, in any case, achieved significantly, but these sportsmen make it clear to us that politics is an even greater minefield to success than becoming an international sportsman or woman. Given the chance, we know which career path we’d choose!