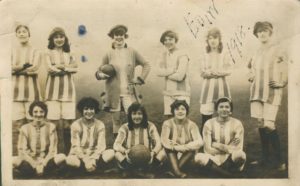 How many male footballers can be described as an England World Cup Winner?! Very few, but Ray Wilson could. An England player, who started his career with Huddersfield Town, Wilson died a few days ago at 83. He was a quiet, modest, key member of England’s 1966 winning football team.

England’s men’s football team winning the World Cup is not something many people today have experienced or remember and, if truth be told, can easily imagine happening now! Maybe we need to go back to basics and learn a few lessons from the likes of Ray Wilson and his background.

Ray Wilson grew up in Shirebrook, a small mining pit village in Derbyshire. In his own football autobiography, he describes his childhood as, “Back street football. A paper round. A punch on the nose. This was my heritage.”  He also noted that, “We had no toys but…all we ever needed was a ball.”  He worked hard, kept his head down and managed to break through to professional football in 1952. Wilson went on to play under four great managers: Bill Shankly; Harry Catterick; Walter Winterbottom and, of course, Sir Alf Ramsey.  Along with winning the World Cup, he helped Everton win the FA Cup too in 1966: the championships were just six weeks apart!

Ray Wilson was the oldest member of England’s World Cup squad in 1966 at 31. He retired from football five years later. He returned to Huddersfield with his family and became an undertaker. How times really have changed! Ray Wilson had an immensely successful football career and yet always retained a humble, modest,  footballing approach. The only thing flashy about Ray was his name: called after his mother’s favourite Hollywood star, his first name was actually Ramon. Try pulling that one off, growing up in a Derbyshire pit village in the 1940s! It seems particularly poignant to say goodbye to Ray Wilson as we ‘limber up’ for the start of the 2018 World Championship in Russia. Maybe Today’s England team will show that humility, doggedness and resilience too…

Footballers are on the move again in this month’s football transfer window.  Remember the first £1 million transfer deal, done in 1979? Legendary Nottingham Forest manager, Brian Clough bought Trevor Francis from Birmingham City for £1,180,000 including VAT and fees. Francis’ deal was double the amount received by Liverpool when Kevin Keegan was sold to Hamburg only two years earlier.

Nottingham Forest to win the European Cup in 1979 and 1980. How easy is it to prove you’re worth £222 million…or are we just suffering from a self-effacing, lack of self-confidence?!

The Olympics and Pele

Who will light the flame at the Olympics in Brazil tomorrow? The big money is on the ‘King of Football’, possibly Brazil’s greatest national treasure, Pelé. The International Olympics Committee has already, and quite rightly, honoured Pelé  twice this year. In June Thomas Bach, IOC president, awarded Pelé the Medal of the Olympic Order, the Games’  highest honour. On the 22nd July, the Olympic torch was passed to Pelé in the town of Santos at the Pelé museum.  Santos was, of course, where the great footballer’s career began.

In 1999 the IOC named Pelé its athlete of the century. He has been officially declared ‘Best Football Player of the 20th Century’ several times. Sadly for him, however, he was never able to play football in the Olympics themselves. His international, professional career began in spectacular fashion at the 1958 World Cup in Sweden. As a 17 year old boy he scored two of the winning goals against home team, Sweden, in the World Cup Finals. At that time only amateur sportsmen were allowed to take part in the Olympics. Professional sportsmen were only admitted to the Games in 1986.  So Pelé was prevented from ever being an ‘Olympian’ footballer- he jokes that that’s why Brazil has never won there!

When Thomas Bach presented Pelé with his Medal of the Olympic Order he said of the Brazilian, “In everything he does, both on and off the field, he exemplifies the Olympic values of excellence, friendship and respect.” Although he may not have played in the Olympics, Pelé has been involved in the Olympic movement massively over the years. We know for a fact that he was an ‘Honored guest’ at the 1996 Atlanta Olympics, because we have recently acquired his accreditation pass for those games, a cracking piece of sports memorabilia and sport history. There he watched his great friend, Muhammad Ali, light the torch with dignity and great ceremony. It will be fitting and equally symbolic to watch the great Brazilian footballer, Edson Arantes do Nascimento, doing the same at the Opening Ceremony in Brazil 2016.

We were very sad to learn belatedly of the death of John Gaustad in June this year. John Gaustad was the visionary bookseller, who set up a treasure trove of sports books in Caxton Walk, off Charing Cross Road in London. It became a legendary book shop for sports fans, especially football fans. Gastaud called it Sportspages.

When New Zealand born Gaustad founded Sportspages in 1985, he developed the world of sports books writing and collecting hugely. So many sports books collectors we deal with today still have fond memories of spending hours at the Caxton Walk Sportspages. Our very own Magnus Bowles spent many a happy hour there, browsing, reading… and then finally buying!

Matthew Engel’s obituary for John Gaustad in the Guardian gives a great sense of the man and the impact of his passion for sports books: . We sadly never met him and inherited the legendary name when the Sportspages shop closed down in 2005. We still receive calls from its original customers, checking to see if we might be one and the same. Our Sportspages is slightly different of course with much more emphasis on sports books and memorabilia from days gone by and a much broader focus on all sports. We hope, however, John Gaustad would be pleased with Sportspages’ reincarnation: we can only aspire to many of his achievements, such as Muhammad Ali coming to do a signing at the Caxton Walk bookshop, but we certainly share the same passion for the breadth and depth of sports books and memorabilia. We hope too that we do some justice to supporting his fantastic legacy in the sports book industry.

Enjoy a great image of 1957 Chelsea football players being led on a training walk by their then coach, Arthur Tennant. We love this press photograph – a fantastic time capsule and snapshot of a Chelsea football team, who probably felt reasonably confident that they were on the up and up by that point. They had enjoyed their first major trophy success a couple of years earlier by winning the League Title in 1955. In 1957 they were preparing to debut at their first European competition: the 1957-58 Inter-Cities Fair Cup. Chelsea had in fact been invited to their first European competition two years earlier in 1955. The French football magazine, L’Equipe, had invited them to take part in the inaugural 1955 UEFA European Cup. The Football League blocked Chelsea’s participation, however. They felt the tournament would be a distraction to domestic football!

The young and ambitious Ted Drake had been managing Chelsea since 1952 and by 1957 he had remodelled Chelsea football club and its players significantly. Drake had brought in successful, new signings and improved the youth set up. He changed the club’s image fundamentally too – gone was the old ‘Pensioners’ crest. In came the rebranded ‘Blues’. Perhaps this press photograph is part of that rebranding? A jaunty shot of the ‘Blues’ on a training walk in their training kit and very cool, uniform trainers!

It’s fascinating to see how freely the players were able to walk through central London with little sense of being mobbed by the public. It’s also amazing to see the children watching the players as they pass by – what child would be able to stand atop the embankment wall with his/her back to the Thames now?!