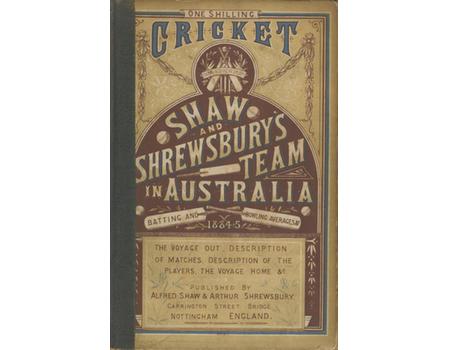 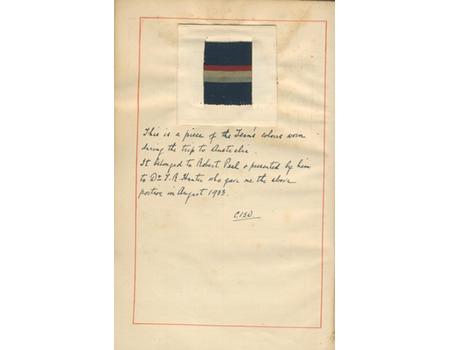 The voyage out, description of cricket matches, description of the players, the voyage home &c. An important and rare early cricket tour book detailing the English cricketers tour of Australia in 1884-85. The team was organised and led by the Nottinghamshire professionals, Shaw and Shrewsbury and played a total of 35 matches. They won a controversial Test series, 3-2.

8vo. 181pp.+ [9] adverts. Tipped-in photograph of the team. Original decorative wrappers, with restored spine - which now has gilt title. The gutters have also been strengthened with cloth tape. Private bookplate to front pastedown along with the ink signature of an early owner of the book - the well-known cricket collector and historian C.I.S. Wallace (dated 1905). To the blank page on the back of the title-page Wallace has laid down a piece of the team's colours from the tour which originally belonged to Robert Peel. Wallace has written an explanation - "This is a piece of the Team's colours worn during the trip to Australia. It belonged to Robert Peel and presented by him to Dr. J.R. Hunter, who gave me the above portion in August 1933".