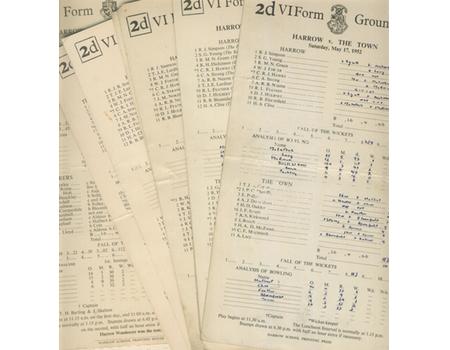 A collection of 13 scorecards from 1952 and 1953, all played on the VI Form Ground. From 1952 the oppponents were: The Town, The Butterflies, The Free Foresters, The M.C.C., Malvern, Haileybury and I.S.C., The Harlequins, I Zingari, Harrow Wanderers and finally The Cock House Match (The Grove v Moretons). The two scorecards from 1953 were against Malvern and Harrow Wanderers. Also included is the Harrow v Eton match played at Harrow in July 1970. Noted opponents include Sir Michael Bonallack, who batted at number 11 for Haileybury (the same year as he won the Boys Amateur Golf Championship); EW Swanton, who opened the innings for the M.C.C.; and Viscount Cobham, who scored 63 for The Butterflies.

Most completed neatly in ink. All in good condition.