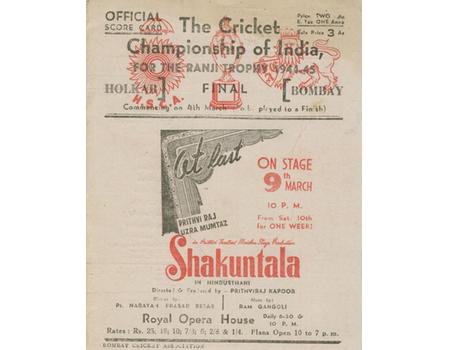 Cricket scorecard for the Ranji Trophy final between Holkar and Bombay, held at the Brabourne Stadium on March 4-9, 1945. In a remarkable match Bombay won by 374 runs, despite Denis Compton scoring 249* in the second innings. Vijay Merchant scored 278 for Bombay and the amazing form of Rusi Modi (98 & 151) continued - his first innings score was the only time that he was dismissed under 100 in the tournament and he played five matches, scoring 1008 runs at an average of over 200.

Single folded card. Facsimile autographs of all the players across the scorecard and some scores recorded in pencil. Very good condition.