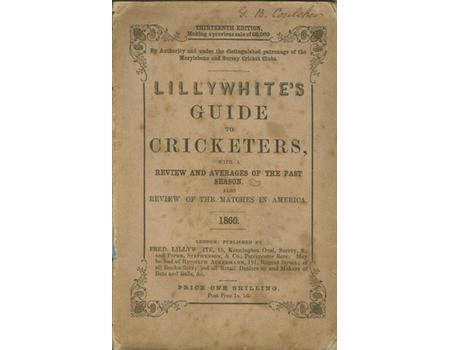 Fred Lillywhite's guides were published annually from 1849 to 1866. The work was subequently incorporated with John Lillywhite's Cricketer's Companion, the third issue of which, published 1867, is called the 23rd edition of the Guide. This is the thirteenth edition.

Paperback. 12mo. 120pp. Paper to spine is largely present, with just a few chips. Some corners are a little dog-eared and the original owner has written his name neatly to top corner of front wrapper. Contains the original blue advertisement sheet of "Cricketing Postures", a set of 8 lithographs recently published by Fred. Lillywhite. In very good original condition. [Padwick, 1086]