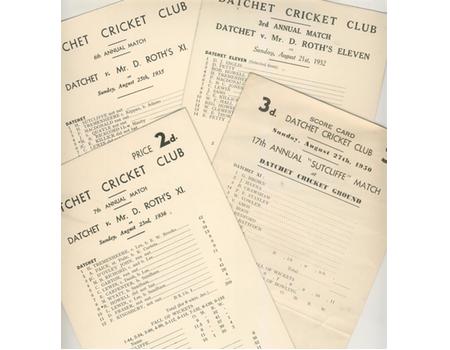 Four cricket scorecards for what became known as the annual "Sutcliffe" matches - 1932 (3rd), 1935 (6th), 1936 (7th) and 1950 (17th). The games in the 1930s were titled Datchet v Mr. D. Roth's Eleven, but by 1950 the title had changed. Herbert Sutcliffe was an ever-present in the first three matches, others players including Sandham, Brooks and Sellers. In the 1935 match he opened the batting for Datchet, scoring an unbeaten century. The Sutcliffe XI in the 1950 match included Trevor Howard, Learie Constantine, Percy Fender, Alec Bedser, Surridge, Sims and Brennan. Two cards fully printed and two not completed. All very good.