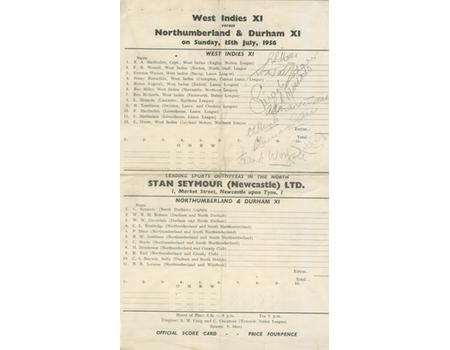 Official cricket scorecard for the match played on July 15th, 1956. The West Indian XI was made up of players from the Northern cricket leagues, although most were or had been Test match players. Signed to the front in pencil by 9 West Indian players - Worrell, Ramadhin, Hunte, EA Martindale, Ken Richards, Messado, Roy Miller, Asgarali and AE Martindale. Manny Martindale captained the team, which seemed to include two relations of his (his sons?). The home team boasted the great Indian cricketer C.S. Nayudu in their ranks.