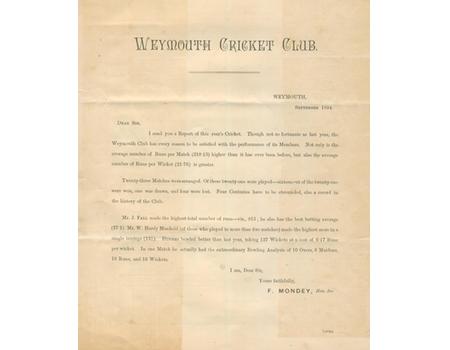 Official report of the 1894 season at Weymouth Cricket Club, including a short written report, match results, averages, comparison with the previous season etc. Their star bowler, Hughes, took 127 wickets at an average of 6.17, with a best of 10-10. Major James Spens, who also played for Hampshire and the MCC, played one match, scoring a handy 135.

4to. 4pp. Bound in maroon cloth-covered boards. The report was originally folded and sent by post - there is now some surface loss to the back cover where it had once been stuck down. This includes a very small hole which has affected a couple of names in the batting averages. Otherwise in very good condition.